Barbera d'Alba comes from 4 ha on several slopes around La Morra and Serralunga. Most limestone soil, but often with clay. The grapes are harvested later than others to get more fruit than the other Barbera. Insanely delicious and authentic Barbera. Red berries, wood and some bloody touch in the scent that is classic in a Barbera from Piemonte.

Michele Reverdito took over the domain from his father in 1999, a vineyard of 22 hectares in la Morra, which delivers approx. 70,000 bottles. He is assisted by his sister Sabina in the celler and in the vineyards by his parents. The methods are sustainable - insecticides, pesticides or fertilizers are not used here. What distinguishes the domain is a balance of the wines that both cater for the grape characters and at the same time have a fruit which gives even Barolo's from single fields a very wide drinking window. Gambero Rosso writes: "Reverdito offers character and depth in wines at very reasonable prices". 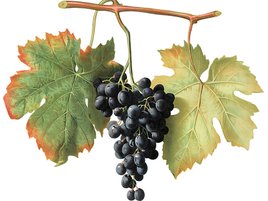 No grape has known such a dramatic upgrade in its fortunes and image in the last 20 years than Barbera in Piemonte, north-west Italy.

This grape was once regarded as rather ordinary, partly because it was so widely planted, the most common Piemontese grape in fact. Light, tart Barbera was the everyday drinking wine on Piemontese tables, something to wash down the wondrous local cuisine and its succession of courses, paving the way on special occasions for a bottle of a serious red wine made from Nebbiolo.

The man who first put Barbera on a pedestal, or at least demonstrated that it was capable of making serious wine rather than local mouthwash, was the late Giacomo Bologna of the Braida estate whose Bricco dell'Uccellone was the first internationally marketed Barbera. The wine, which has since been followed by hundreds of increasingly expensive imitators, owed its distinction to two factors, much lower-than-usual yields and ageing in French oak barriques.